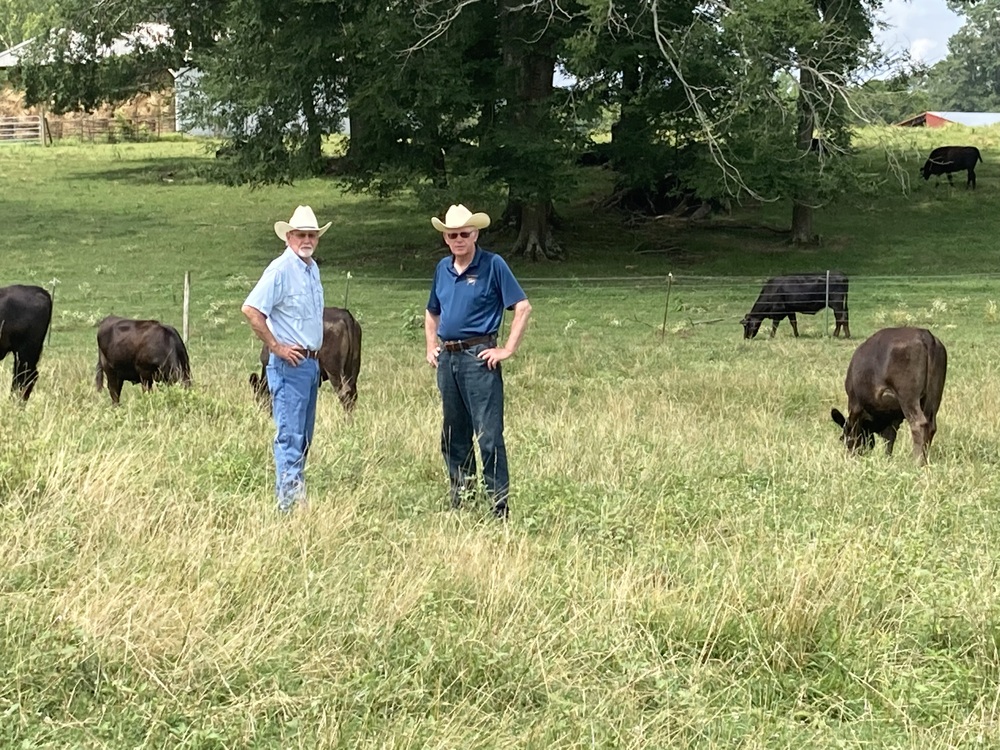 Recognized in 1979 as an Alabama Century and Heritage Farm, Yarbrough Stock Farm, LLC in Ashville, AL has a rich history. We have applied for Bicentennial Farm status. Our farm was settled in 1822 by our great great great grandparents, Manoah and Mary Cunningham Yarbrough whose mother rode in George Washington’s inaugural parade. They traveled from North Carolina through Tennessee to Huntsville, AL and eventually settled on Beaver Creek in Beaver Valley in St. Clair County. We have several documents from the Federal Bureau of Land Management in Washington, D.C. signed by President James Monroe stating that Manoah paid for his land in full according to the provisions of the Act of Congress of the twenty fourth of April, 1820. Today, this farm is proudly owned and operated by us—sixth generation owners, siblings Fitzgerald Yarbrough II and C. Burk Yarbrough. No one except the descendants of Manoah and Mary have ever owned or lived on the original part of the farm.

Manoah Yarbrough ran corn and flour mills in North Carolina before settling in Ashville, AL in 1822. He brought his mill including the mill rocks with him; we still have these mill stones. In addition to the  corn and flour mills operated here, a sawmill, a shingle mill, a cotton gin, and a wool carding mill were added through the years. Water to supply power to them was gotten from a dam built on Beaver Creek by Manoah that flows through the farm. It was made higher by later generations. The Yarbrough Mill operated a little over 100 years. The cotton gin operated until 1925 when a flood washed the water gates out and damaged the water house beyond repair. The water wheel is still in the creek and visible when the water is clear. It has washed down the creek about 50 feet from its original location in the waterhouse. The outline of the rock foundation and rock sides of a dry kiln where lumber was dried is still visible near the dam.  The original dam is used today as a roadbed leading to a bridge which crosses the creek. This bridge was constructed in 1985 by our father and us on the foundation of the original dam where the water gates were. It made travel to pastures and hay fields on the south side of the creek much easier as well as checking on the cattle on that side of the creek.

A wool carding mill was built and used to card wool for the Confederate Army during the Civil War. Manoah also had large apple and peach orchards and crushed fruit to make brandy. He  had a license to make whiskey for the Government and transported it to Jack Daniels in Tennessee. We were told the approximate location of the “brandy rock” by our great uncle. It was buried under silt and erosion from the foot of the mountain. Probing and digging with a post hole digger in the general area, we found it and moved it to a location by the dairy barn. The dairy barn was used in the 1940’s and 1950’s when our father and great uncles ran a dairy on the farm.

From the beginning of the farm, it was the home to the customary animals on a farm—livestock, oxen, horses, mules, chickens, roosters, hogs, etc. Crops raised included cotton, corn, wheat, oats, and other grains. In the 1940’s, Daddy and his uncles began to specialize and began a dairy. Milk was sold to Tro-fe Dairy Company in Gadsden, AL. They also had chicken layers and sold eggs to Hill Grocery in Pell City. The egg production was discontinued in the mid 1950’s. Then in March 1960, Daddy sold the dairy and started the beef cattle farm.

In 1951 our parents bought an additional farm about one mile from the original farm. It had originally been settled by the family of Daddy’s great grandmother, Nancy Ashcraft Yarbrough. We also operate that farm as an extension of the original farm.

Daddy taught school and farmed in the afternoons and in the summers. He raised oats, had a silo and ran a dairy for several years. After he sold the dairy he began to raise beef cattle. In addition, he raised and baled all the hay that was fed on the farm. We grew up following Daddy around the farm so we learned first-hand the day to day operations of the farm. We began helping on the farm as soon as we were big enough, creating in each of us a strong work ethic. Early jobs included throwing sections of square bales off the back of the truck to feed the cows in the fall/winter, counting cows, opening and closing gates, and bottle feeding calves when needed. We learned to drive in the hayfield by driving the trucks and the tractors. We also learned how to care for and operate the various equipment used on the farm. Daddy retired from teaching in May 1979, and then ran the farm full-time with our help. He added to the original farm by buying 53 acres adjoining property that had been part of the farm before the Civil War.

We also had a career teaching school and working on the farm in the afternoons and during the summers. We helped Daddy enlarge the beef herd and worked with him until his death in 2013 when we took over. When more property joining the farm became available, we along with our sister, purchased 106.8 acres. This brought our farm total acreage to 443.85; hence, we increased our herd again. Presently, our cattle herd ranges from 250 – 300 head. Each year we bale 1100 – 1200 round bales of hay to feed them.

Days on the farm are long. No two days are ever alike. Some spring and summer days we are up and out at daylight and do not come home until hours after dark. Fall and winter days are generally shorter. Looking after the cows must be done 365 days a year whether the temperature is extremely hot or frigid, whether it is raining or snowing or there is pretty weather. The weather forecast contributes much to mowing, fluffing, raking, baling and putting round bales of hay in the barns. Much is involved in raising cattle besides feeding them—calving, tagging newborns, vaccinating them, moving herds from one pasture to another, fertilizing fields, planting winter grazing, bushhogging fields, day to day upkeep and repairing machinery, fences,  barns, etc. We also collect numerous soil samples in order to determine what fertilizer is needed for each field. We have learned much about veterinary science through the years. Not only do we look after our herds, neighbors often call us for advice.

After two hundred years in business, Yarbrough Stock Farm, LLC is now operated by us. We are both retired from teaching school and  work fulltime on the farm.  Both of us have an Ed.S (education specialist) degree in biology. With the acquired knowledge from five previous generations as well as the farm knowledge we learned from our childhood on, we are able to manage the land effectively and raise our beef humanly.  The love of caring for this family farm is shown in the superior beef product we produce. We raise and sell grass fed Angus beef cattle that receive no antibiotics, steroids or hormones. Our meat does not contain any preservatives. We continue to raise and bale all the hay fed to our beef livestock. In the last couple of years, we have added Akaushi (Waygu)  to our herd in order to expand the choice of meat we sell. These should be ready for sale in fall 2023.

We strive to provide affordable farm-to-table beef. Our grass fed beef is sold in twenty-five pound boxes, one-half beef, or a whole beef. If you order one-half  or a whole beef, you will be able to have your meat cut to your specifications. All cuts are in vacuum sealed packages except hamburger that is in E-Z plastic tubes that keeps the air and light out. Beef boxes contain 8 – 10 pounds steak, one roast, and the remainder in hamburger meat.  To place an order call Fitz at (256) 393-2798, Burk at (256-390-0682) or Nancy at (205) 541-1375.

To learn more about Yarbrough Stock Farm visit us on Facebook.