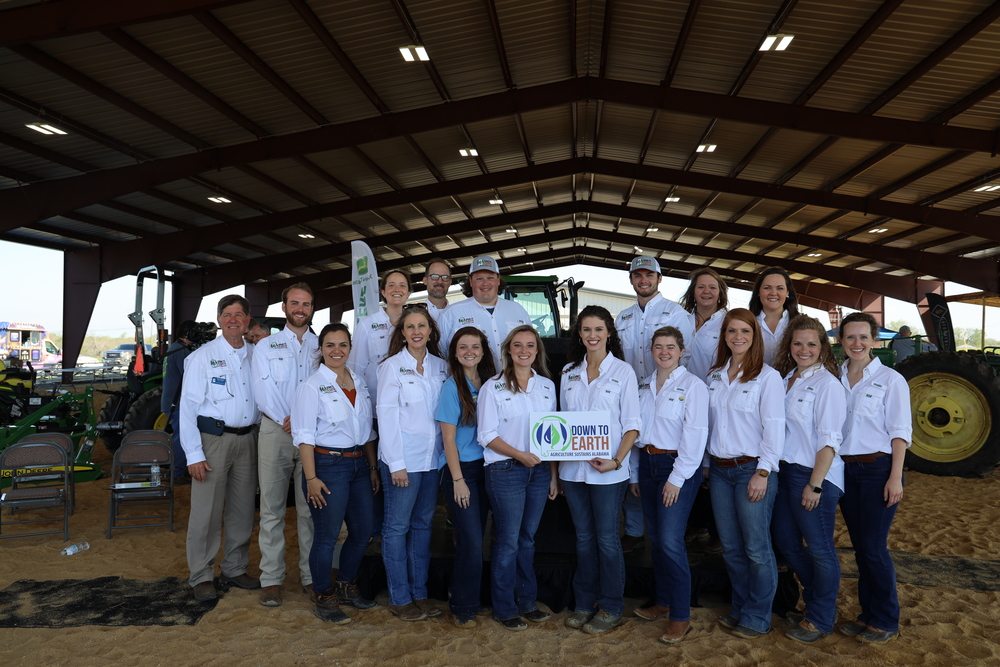 At an afternoon press conference, Gov. Kay Ivey proclaimed March 31 Down To Earth Day. Ivey, whose rural roots run deep, lauded the collaborative campaign, which will showcase sustainable, high-tech and efficient techniques farmers and forest landowners have followed for decades.

“It’s an absolute pleasure to kick off the Down to Earth campaign with so many friends from the agriculture and forestry communities. Make no mistake about it — our farmers and forest landowners are the backbone of Alabama’s economy,” said Ivey, a Wilcox County native whose father raised cattle and timber in Monroe County. “For agriculture and forestry to continue to thrive, it is imperative that we continue to be good stewards of the land and practice sustainable methods to keep our forests full and our soil fertile. That’s what Down to Earth Day is all about —encouraging sustainable methods so our land remains Alabama the Beautiful for generations to come.”

Ivey’s remarks followed a fun-filled field trip for Pike Road School System fourth-graders at the Pike Road Agriculture, Recreation and Performing Arts Center (ARPAC). Through hands-on activities at a dozen stations, over 200 students learned about Down to Earth’s Big 6 topics — carbon emissions; animal and plant efficiency; data and technology; conserving natural resources; smart land use; and sustaining for the future.

A team of farmer-spokespeople representing diverse commodities and counties will spread the Down to Earth message through social media, interviews with traditional media and features in partner publications through March 2023.

Spokespeople include Drew Wendland and Jane Russell, who spoke during the press conference. Wendland and Russell noted their different backgrounds but united approach to caring for the land.

“My two sons love the farm and the life it offers. My job is to make sure they have the same opportunity that I was given by my dad,” said fifth-generation farmer Wendland, whose family raises row crops, cattle and timber in Autaugaville in Autauga County. “Every day, I try to make decisions that steward our natural resources to leave the land better than I found it, just like my dad did for me, and his dad did for him, and his dad did for him. To me, that’s what sustainability is all about. It’s about sustaining businesses, sustaining livelihoods, sustaining families and making sure that anybody who wants to in the future has a better chance at it than we did.”

​Farm families such as the Wendlands care for Alabama’s over 40,500 farms covering 8.6 million acres. Alabama is home to an additional 23 million acres of highly productive forestland, a figure Russell said ranks third in the contiguous U.S.

“Alabama forests are the jewel of nature, and the forestry business is so valuable in the state — we have 23.1 million acres of forestland, 16.3 billion live trees and 93.2% are privately owned,” said Russell, a timberland owner and cattle farmer in Ada in south Montgomery County. “Thomas Jefferson once said ‘Let the farmers forevermore be honored in his calling for they who labor in the Earth are the chosen people of God.’ It is a privilege to be a farmer.”

Down to Earth Co-chair Kayla Greer said her group’s goal is to reach at least 1 million consumers with Down to Earth messages.

“At the end of the day, we want people to know sustainability isn’t about the size of the farm or the commodity produced,” said Greer, who serves as campaign co-chair along with Caleb Hicks. “It’s about using the land in smart ways and protecting our natural resources so we can produce food, timber and fiber for people now and long into the future.”

Meanwhile, five teams of media personalities participated in a competition featuring common agricultural tasks. The contest included a rural relay, where participants roped a calf, donned a poultry biosecurity suit and measured feed; raking a fire break to slow a forest fire; and Rural Jeopardy! featuring questions about Down to Earth’s Big 6 topics.

Over the year, the Down to Earth message will be shared online at DownToEarthAL.com as well as through social media ads, events and bimonthly press releases. FFA groups, 4-H clubs and civic organizations will help share Down to Earth’s sustainability message. Down to Earth was also Alabama Farm-City’s 2021 theme.