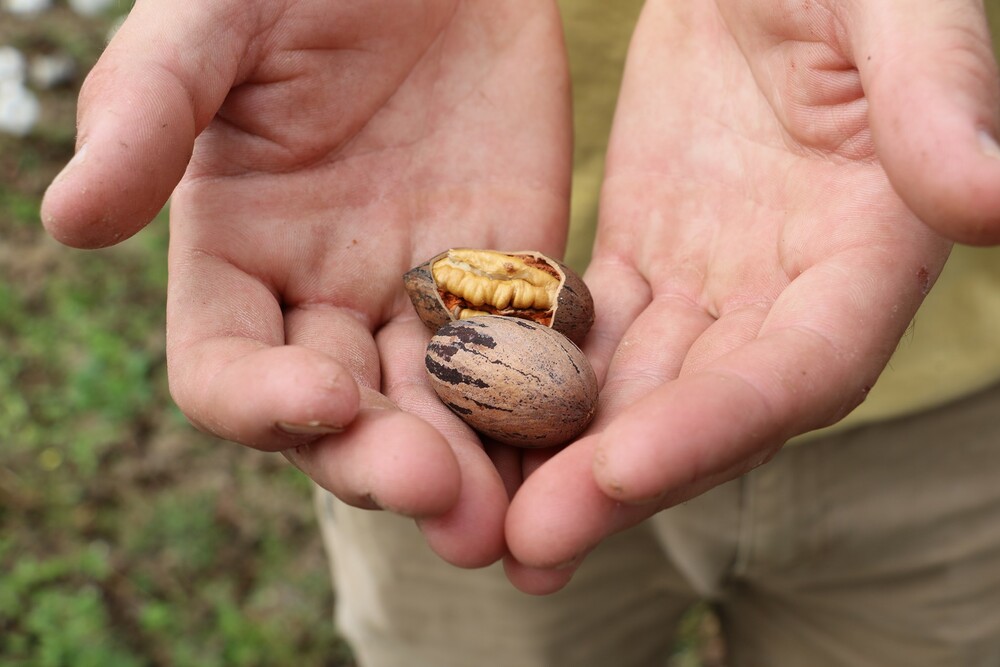 Pecans are one of the most underrated treasures in Alabama agriculture. They are nutritious and provide many health benefits. The South provides the perfect environment for successful pecan production and can bring an additional source of income to any farm. Alabama’s pecan industry boosts the economy and provides a healthy snack.

Over the years, research has been conducted by the University of Georgia, Auburn University and the United States Department of Agriculture (USDA) to help southern farmers be successful in growing and maintaining pecan orchards. Auburn University’s E.V. Smith Research Center conducts extensive studies on pecan trees to create cultivars, fertilization methods, and irrigation plans that are cost efficient. Researchers have developed several new varieties of pecan trees that are less costly and produce higher yields in half the amount of time compared to older varieties. Additionally, research efforts by the USDA include the promotion of pecan production, marketing and funding research with an annual assessment fee. Farmers pay a small fee of two to three cents per pound of pecans to the USDA for access to promotion and marketing tools, while supporting research for the industry.

Pecan production in Alabama is abundant and continues to succeed. Listed below are five beneficial facts about Alabama’s expanding role in pecan production.

Pecans have become a staple in Alabama agriculture. As the official state nut, they bring in an estimated $10 million dollars annually with around 9,000 acres of orchards in the state. Since 1935, Priester’s Pecans has specialized in making delicious pecan treats. They sell over 100,000 pecan pies and shell upwards of 2 million pounds of pecans annually, according to owner Thomas Ellis.

2. Pecans provide just as many nutrients as blueberries.

According to Priester's Pecans, this ‘super nut’ has tremendous health benefits. Pecans are rich in vitamins, nutrients and help reduce the risk of Alzheimer’s, breast cancer and heart disease by 25 percent. Pecans are also a great low-carb snack for weight loss. Priester’s Pecans is a member of Sweet Grown Alabama, an organization that helps connect farmers and consumers to Alabama grown products.

3. Pecans are the only nut tree native to North America.

Pecans date back to the 16th century, being found only in the southern United States and regions of Mexico. Older varieties found then, took an estimated 10 to 12 years to produce a harvest. Now, new varieties only take five to seven years to produce pecans.

4. No two pecan trees are the same.

Like our fingerprints, no two pecan trees are identical. Each tree is unique because it hosts male and female flowers. This results in nuts with different shell thickness, size, quality and taste. Today’s more popular tree varieties include Elliot, Desirable, Gafford, McMillan, and Amling, all of which are scab (a common pecan disease) resistant, require less fertilizer and produce higher crop yield in less time. Many of these unique trees can be found across the state, like at Tommy King Pecan Company orchards located in Notasulga, Ala.

“Be sure, do some research, and make sure they don’t scab,” said Richard King, owner and operator of Tommy King Pecan Co. when asked about the struggles of maintaining such a unique commodity.

Pecans were taken to the moon in the Apollo 11, 13 and 16 space missions because they are perfect for research conditions in space and on spacecrafts. They are nonperishable and compact, making them the ultimate gravity-defying snack. Pecans have made an astronomical impact in the aerospace food program and are still consumed by astronauts today.

The pecan industry in Alabama is thriving, and one would be ‘nuts’ to miss out on an opportunity to get involved. Today, over 100 farmers are members of the Alabama Pecan Growers Association (APGA), according to President Terry Landry. The APGA is a nonprofit organization that helps pecan farmers connect for profitable production and marketing practices.

“I encourage everyone interested in growing pecans to join the Alabama Pecan Growers Association," said Landry. “The knowledge I gained from other growers, researchers and the monthly magazine has helped me to become a successful pecan producer.”

You can support the pecan industry by operating a pecan orchard, buying from local pecan producers like Tommy King Pecan Company or tasting a famous Priester’s pecan pie.